Generational poverty is the opposite of generational wealth. Instead of inheriting a solid financial foundation and getting a leg up in life, kids are taught little about finance and learn to live hand to mouth. It’s a phenomenon that affects millions of people in the United States.

To understand generational poverty, we first need to understand poverty in America. Here are some quick facts about poverty, provided by Poverty USA. 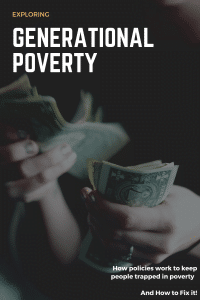 People trapped in generational poverty often lack the education, resources, and even hope to escape it. Poverty is the only thing they know. There is no planning for the future; there’s only trying to survive day-to-day.

It can often seem to those of us looking in from the outside that it’s their own fault they are poor. They spend the little money they have on junk food, cigarettes, and alcohol. If they only saved that money – they might be able to dig out of poverty and provide a better outcome for their children. We shake our heads and blame them for their situations as if saving that twenty bucks every week would help them pay for college or buy a house.

The reality is more difficult to face because doing so means acknowledging the systematic policies in place that work to keep people trapped in generational poverty. We have to admit that some of those systems have given us a leg up, and they’ve helped us achieve our goals at the expense of others.

In a society where rugged individualism is celebrated above all else, it can be challenging to take a minute and appreciate all the help that we received in reaching our goals. Whether that be in the form of tax breaks, parental help, or even just not having to overcome unconscious (and sometimes very conscious!) biases that hiring officials have regarding race and gender.

The truth is that there isn’t just one cause of generational poverty. It’s a multi-faced issue with reasons ranging from racism to financial policy, access to healthcare to access to education.

How Can Someone Overcome Generational Poverty?

A lot of us only consider the individual. We think that it’s up to each person to claw their way out and overcome the systematic failures that created generational poverty.

Don’t get me wrong – it is possible. A few people have worked incredibly hard and beaten the odds. They worked multiple jobs while in high school, got college scholarships, and did everything they could to break the cycle of poverty that their family was stuck in. Unfortunately, we often look to those exceptional examples as proof that anyone can do it, and the reality is that isn’t true. Not everyone has the same skills and aptitude. Not everyone can be exceptional, and you know what? That’s okay. We shouldn’t put the onus on the individual to overcome generational poverty when it’s not the individual’s fault that they are stuck in it.

How Can Society Fix Generational Poverty?

The real fix for generational poverty will come at the societal level. There are some social safety-nets in place, like SNAP (Supplemental Nutrition Assistance Program) and TANF (Temporary Assistance for Needy Families), commonly referred to as food stamps and welfare, but they aren’t enough.

We, as a society, could do so much more to help the working poor escape poverty. We have to collectively decide that programs designed to help people are worthwhile and make an effort to fix the programs we already have in place.

I’m no policy expert or anything, but these are some of the things we can do, in my opinion, that would help end generational poverty and help give low-income families a shot at economic mobility.

Here is where we take a slight curve away from discussing facts about poverty and transition into an editorial piece about what I think we can do to fix it.

Unfortunately, our system is designed to prevent people from digging out. We have a “welfare cliff” rather than a slope. That means if people try to do better get better jobs, they lose all their benefits and are thrust back to square one. This leaves people hopeless and thinking there is no escape. Why try harder when they are punished for it?

We can fix this by ending the welfare cliff. Instead of losing benefits the second your income reaches a certain threshold, they should taper off slowly. A “welfare slope” will give people an incentive to keep working harder – an incentive to try to do better. It will prevent families from choosing to take an insecure job or maintain the benefits they had to desperately fight for in the first place. In my opinion, ending the welfare cliff would give thousands of people a real opportunity to get out of poverty.

Having kids is expensive. According to American Progress, it costs Americans on average $1230 per month to pay for childcare. That’s nearly $15000 per year. The poverty threshold for a single parent with one child is a little under $18000 per year. Even if that parent made enough to be just at the threshold, paying for childcare would only leave $3000 to pay for every other expense. If they have more than one child, the cost of working would be far more. That’s not feasible. It’s no wonder that single parents chose to stay on government assistance rather than work.

Please don’t comment with stuff like “they shouldn’t have gotten pregnant” or “stop having kids you can’t afford.” Having kids shouldn’t be a privilege reserved only for the affluent. People shouldn’t be punished for circumstances outside of their control. You never know someone’s situation either, so let’s not judge. Instead, let’s do better for these families.

One of the best ways to dig out of poverty is getting educated and getting a good job. That’s great for the middle-class, who have access to student loans and good high schools. For the poor, getting an education is a dream. It’s prohibitively expensive, and because their families are stuck in poverty, they don’t have access to loans to help them pay for it.

Trickle-down economics was a fun thirty-year experiment that didn’t work. It led to massive levels of income inequality and made it more difficult than ever for people to advance in socioeconomic status. It’s time to end this system that benefits only the richest among us and start looking into programs to help everyone.

In my opinion, UBI would be the best place to start. Putting cash directly into the hands of the people so that they could spend it on whatever they need would do wonders for lifting people out of poverty and stimulating the economy. Our system is flawed, and it’s time to find a drastic solution to fix it.

Acknowledge and Work to Fix Systematic Racism and Sexism

Our society has failed at being frank about systematic racism and how it plays into generational poverty. There’s a reason that the statistics show black families are more likely to be in poverty – and that’s racism.

Racism is built into our systems. Racial inequalities in the criminal justice system have led to nearly 1/3 of all black men being issued prison sentences. That’s compared to 1/17 of white men. Black men are more likely to be mistreated at every stage of the process – from being targeted and searched more, convicted more, and given harsher sentences. How can you dig yourself out of poverty if you are stuck in prison? How can you help your family escape? Can you even get a decent job if you’ve served time? This situation is untenable and needs to be fixed.

But racial inequality is prevalent everywhere, not just in our justice system. Black-sounding names on job applications are less likely to get called for an interview than white names. Red-lining was illegal until the 1970s – that was only one generation ago! And the real estate industry still makes it more difficult for black families to buy homes now – they do it in sneakier ways, like requiring more documentation, requiring higher credit scores, and requiring higher incomes. People of color, especially women of color, earn less on average than any other segment of the population. We all need to come to terms with and work to address these issues.

Institutional sexism is also a problem that works to keep single mothers trapped in poverty. The gender pay gap is very real. Even when they can manage childcare, women with children are discriminated against. God forbid a company give parents (and people in general) time off to be sick or care for loved ones.

We have the power to change this system. We can lift millions of families out of generational poverty. To help our fellow Americans have better lives.

There’s one important thing we can do, and that’s vote. But don’t vote among party lines. Vote for politicians, regardless of party, who have proven track records of solving these issues. Vote for the policies that would help reduce generational poverty, even if they might end up costing you a little more in taxes. The health and welfare of millions of Americans depend on it.

We can end generational poverty. It will take a lot of effort and may cost us extra money in tax dollars. Some folks may have to give up some of the privileges they’ve been accustomed to for generations, and as they say, equality feels like oppression when you are used to privilege. Ending generational poverty won’t be easy and won’t happen overnight.

However, despite the difficulty, it’s a worthy cause and one we should strive to accomplish with everything that we do.